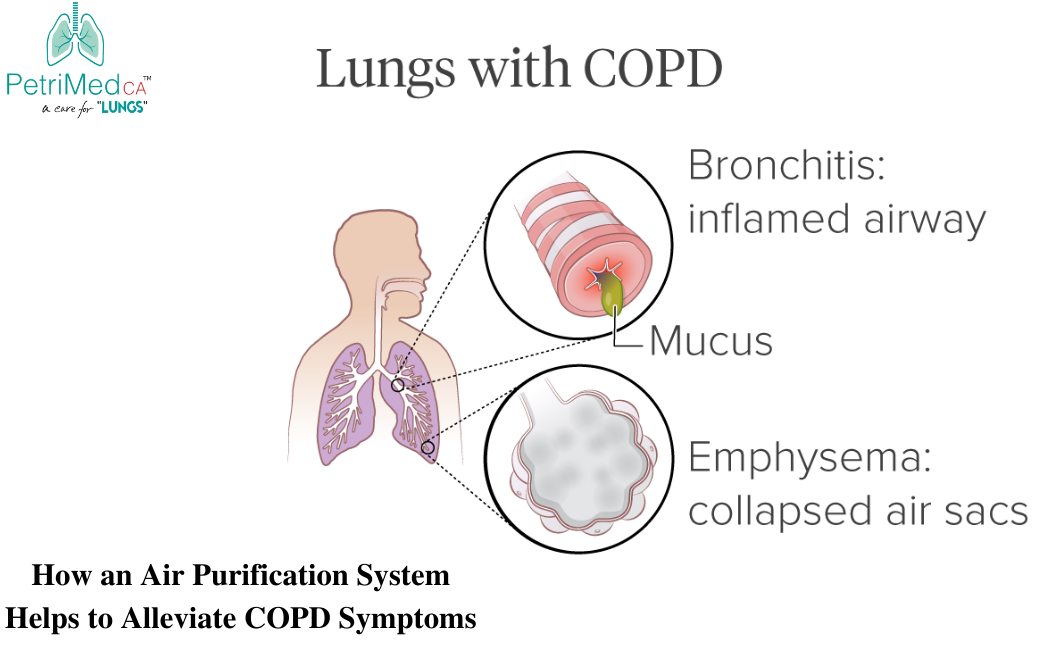 ·  The symptoms include cough, breathlessness and excessive mucus among others

Experts opine that the lung symptoms can be eased by reducing the concentration of allergens and pollutants. An air purification system decontaminates the indoor air by trapping the tiny particles and allergens through its mechanically-advanced filtration technology.

Few things are as crucial for human health and longevity as clean air. If the air we breathe is pure, it has to be a given as an exponential benefit for our survival. The air we breathe should be as pure as possible because it nourishes the lungs with oxygen. The air also nourishes our blood as well as the rest of our organs.

In a nutshell, nourished air is a prerequisite for all of us, particularly for those experiencing the symptoms of chronic obstructive pulmonary disease (COPD). Which is why one must guard against allergens and tiny particles which can trigger lungs complications and cause some serious issues.

Indoor air, it must be noted, carries multiple nonvisible particles emitted from different sources such as cleaning products, kitchen, furniture, pet, dust, mold spores, and many more. The combination of these polluting sources can create the concentration of tiny particles 2-5 times higher than the level of outdoor pollutants.

["Working environments, which are inadequately designed from the building physical point of view (acoustics, indoor climate, lighting, air quality), have an impact on health, thermal comfort and performance."

One way to purify the indoor air is to use an advanced air purification systems that sanitize the air and remove tiny particles through different filtration levels. However, it is possible to fight against the menace of pollutants only when you go for an efficient device that is fitted with a high-end HEPA filter, pre-activated carbon filter, UV-C disinfector, and other related technologies.

Chronic Obstructive Pulmonary Disease, abbreviated as COPD, is one of the leading reasons of death across the world. It is a chronic inflammatory lung disease, which leads to shortness of breath due to congested airflow from the lungs. The symptoms include cough, breathlessness and excessive mucus among others.

The disease is generally caused by long-term exposure to indoor contaminants like PM2.5, irritating gaseous pollution, and allergens. According to the U.S Environmental Protection Agency, the high concentration of harmful particles inside a home may worsen COPD and also lead to premature deaths. The U.S. Centers for Disease Control and Prevention (CDC) also suggests eliminating fine particles at home to check the early development of COPD.

An air purification system decontaminates the indoor air by trapping the tiny particles and allergens through its mechanically-advanced filtration technology. While the studies on whether it helps people with COPD are still not conclusive, experts opine that the lung symptoms can be eased by reducing the concentration of allergens and pollutants.

PetriMed CA APS 400 is amongst a few medical-grade devices that can efficiently ease the COPD symptoms. Fitted with a high-end medical-grade HEPA (high-efficiency particulate air) filter, it is mechanically efficient to trap 99.999% of tiny air particles. Meanwhile, unlike ordinary air purifiers for homes, PetriMed CA APS 400 can be more helpful in easing the symptoms of COPD thanks to its multi-stage air purification module. With a built-in air ionizer and UV-C disinfector, it emerges as an ideal choice for people with COPD symptoms.

Using an air treatment system can be more helpful for those living in areas with high concentration of pollens. But it is essential to invest in an advanced system like PetriMed CA APS 400 that can remove almost all fine particles including VOCs from indoor air in rooms.

Even if an air purification system is in place, some additional important measures need to be considered to keep the indoor air clean and healthy.

·  Shut your windows on the days with high concentration of pollens

·  Avoid secondhand smoke. Do not allow anyone to smoke inside home

·  Use exhaust in the bathroom and kitchen areas

·  Use a vacuum cleaner to keep dust and mites away

It will be unrealistic to claim that an air purifier for homes can immediately ease the symptoms of COPD, but you will definitely feel the difference sooner or later.