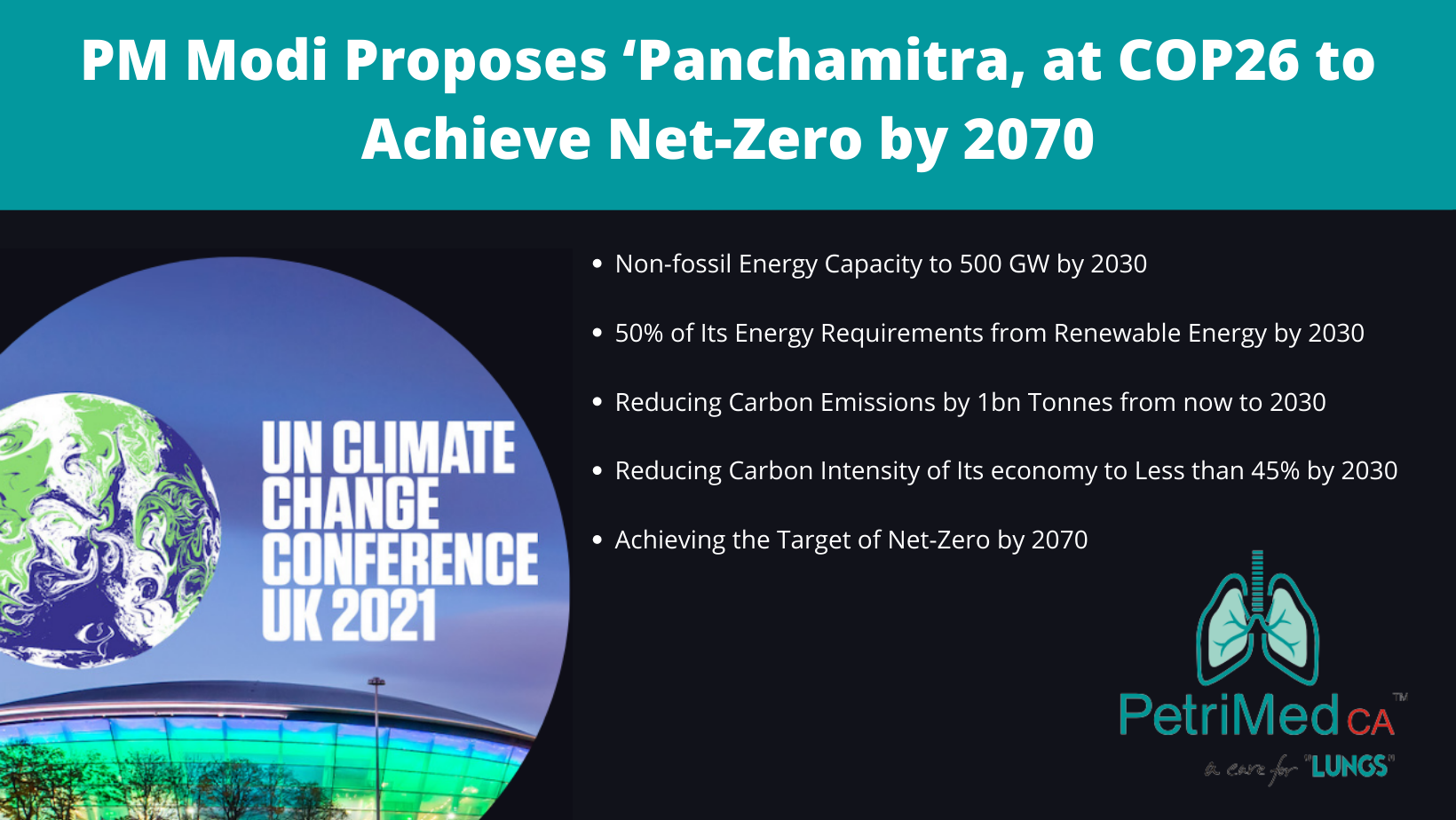 PM Modi’s resolve to attain ‘Net Zero Target’ by 2070 took the global leaders by surprise. He has rolled out India’s roadmap before the heads of the nations on how it will expand its non-fossil energy capacity.

The COP26 Summit kicked off with some conflicting notes delivered by developed nations like Russia and others. The heads of these countries missed out on the opportunity to display their resolution to reduce carbon emissions.

When world leaders were disgruntled on many important points, PM Modi laid out a roadmap to meet the ‘Net Zero’ goal by 2070 by reducing carbon emissions and conserving our planet.

PM Modi took this opportunity to mention many initiatives his government has worked on to preserve water resources, cut down carbon emissions, expand the non-conventional energy front. He further outlined the importance of climate finance for developing countries. He added that for the sake of climate impartiality, developed economies should offer at least $1 trillion to help emerging countries reduce their dependency on conventional energy.

Delivering his speech at the COP26, PM Modi list out five key promises India will be working on relentlessly to bring its conventional energy consumption down to 500 GW by 2030. He added that the country will successfully be able to meet 50% of the energy requirements through non-fossil energy. Further, PM Modi also added that by 2030, India will cut the carbon intensity of the economy in quest of achieving the ‘Net Zero’ target by the end of 2070.

Here are five important promises PM Modi made at the COP26 submit:

·        India will meet half of its energy requirement through solar and wind energy by 2030.

What Does ‘NET ZERO’ Mean?

A lot of countries, including the USA, the UK, Japan, and others, have pledged to meet the goal China, Saudi Arabia and Russia have also rolled out their plans to become carbon neutral by 2060.

Though the goal can be a little bit challenging to meet for many developing countries, the process of accomplishing ‘Net Zero’ is comparatively upfront with two main actions. The easier action is to adopt plantation aggressively. Trees are a natural absorbent of CO2, therefore planting more trees will keep the level of carbon dioxide at the optimal level. Restoring the unfrosted area may also help the countries to attain ‘Net Zero.’

Why Is It Important?

In 2015, the global leaders had signed the historic Paris Agreement to take preventive measures with an objective to keep the average global temperature under 1.5 degrees Celsius. But the Intergovernmental Panel on Climate Change (IPCC) has warned about the impending dangers caused by the casual approach. It added that the action plans pledged by different countries are not enough to limit the average global temperature.

The urgent need, IPCC highlighted, is for the nations to make sure that they will meet the ‘Net Zero’ goal by 2050 if there is to be any serious collective effort of effectively addressing the impact of climate change.

How Can India Achieve this Ambitious Target?

India's 2070 net-zero commitment seems to be more challenging than it sounds—however, achieving the target is not impossible at all. Switching over to non-fossil energy requires firm and consistent efforts to adopt the new technology.

A recent report, published by the research analysts at Barclays, highlights five important actions to be worked on to achieve decarbonization across the world. The first three steps are not as challenging to tackle as the latter two.

·        Increasing the Generation of Bioenergy

·        Use of Hydrogen to Meet Energy Requirements

For the first time, India has unveiled its action points to achieve the target by 2070. Environmental experts from across the world have hailed India’s pledge as a real actionable commitment.